Update November 7, 2010: This event ended up being one of the greatest events of the year and the best Puerto Rico has seen in decades. It was specially historical at both ends of the spectrum, the good and the bad. The fact that Kelly Slater not only won the event, but clenched his 10th world title in Puerto Rico is something that will not soon be forgotten. On the other hand, the contest also marks the point in time when the surfing world lost one of its greatest, Andy Irons. Many mourn his death and I personally send my prayers to his family during this time of incredible loss. May God be with you. -Danny Cruz

In my efforts to bring you more than just news about graphic design here’s a neat little number that talks about two of my biggest interests.  Most of you know I’m a surfer.  It makes me pretty darn proud to find out that Rip Curl has chosen Puerto Rico as the venue for their 2010 Pro Search.  The Rip Curl Pro Search is a professional surf contest that changes venues every year.  Not only that, but once the host country is chosen, they don’t specify exactly where the event is going to be held at in order to “search” for the best spot with the best conditions.

This year could also be of even more significance.  As of this writing, Kelly Slater is ahead of Jordy Smith in the race for the World Title.  This would be Slater’s 10th world title!  Looks like he’s so far ahead that any podium position will seal the deal.  In fact, even if Kelly Slater gets a 25 in Puerto Rico, Jordy needs at least a 5th place in order to stay in the game.

Apart from the fact that the event is in Puerto Rico, what caught my eye was the wonderful artwork created for the event.  The artwork was created by surf artist Tyler Warren.  I was not familiar with Tyler’s work until now, but I can tell you I’m now a fan as I’m truly impressed.  Since I’m Puerto Rican, I can see stuff in that painting that I immediately relate to.  Like the three kings, the Puerto Rican “cuatro” guitar, and the “Garita del Morro.”  Tyler, if you run in to this article, let me tell you, “Good job!  You’re making a Puerto Rican surfer really proud!”

You can see more of Tyler’s work on his website:  http://www.artbytylerwarren.com/ 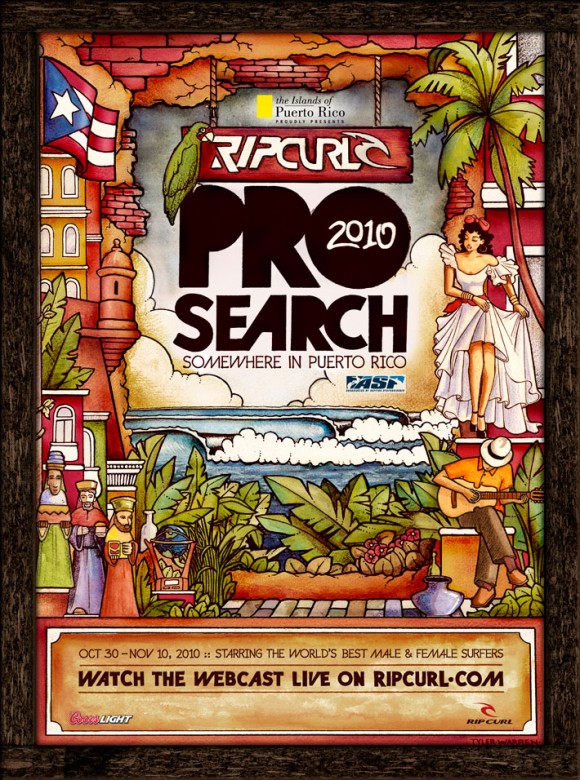